Well, another year has come and gone. 2016 was a wild ride, both personally and politically.

For me personally, my first grandchild came into the world on the 23rd of May. Andrew Gordon is a healthy, happy little guy, and the bright spot in this year!

I went on my first trip to Florida in March, and witnessed the SpaceX rocket launch! Another high point! Coming back we found ourselves paying over $5,000 in maintenance costs on our Infiniti M35, and consequently trading that car in on a Toyota RAV4.

I have never spent so much time working on vehicles as this year. I can’t remember everything I did, but there was the cam position sensor replacement on the Infiniti. Having spent the five grand on the Infiniti, I couldn’t bear to have them do more work on it! So I did the rest myself.  As a trade-in allowance we got back just the recent maintenance costs, and not a penny more!

I miss that Infiniti, what a wonderful car to drive, but we just couldn’t afford to keep it!

My youngest son got his first car, so we found ourselves widening our driveway in the fall, just before the first snow!

Finally, just to make things interesting, we got a puppy in October! We have had dogs almost since we got married, but this is our first puppy! I thought it would be a good experience for our two youngest boys before they leave home. They both said I was crazy!

I was not prepared for the amount of work it takes to train a puppy! 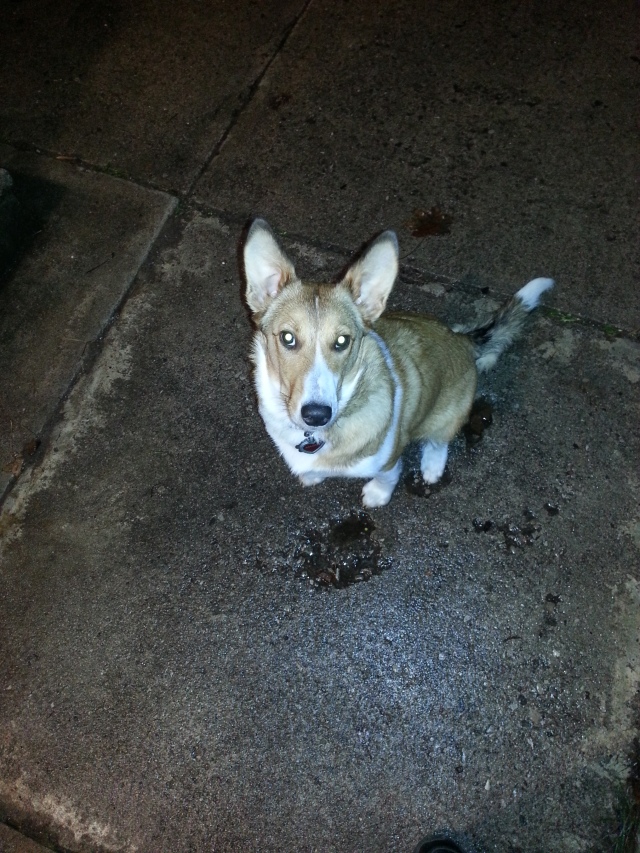 Maggie is half Corgi, and half Sheltie, so I guess she’s a “Corgeltie”, or maybe a “Sheltorgie”

Our older dog, Coda has been having a hard time with this! 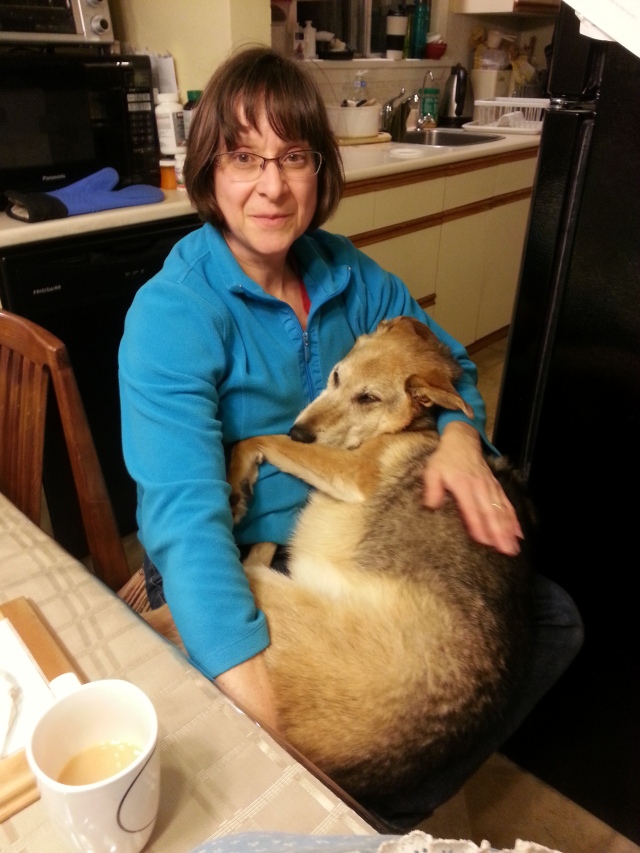 One of my friends, who I went through high school with, who stood-up for me at my wedding, and has been a friend for 40 years, unfriended me on Facebook because I simply said that Donald Trump should be heard-out before we judge him!

The last thing that happened is that Windows on this computer downloaded an “update” and I ended up losing my Ubuntu partition! Argh! So I got it running again, but have lost a lot of information!

On the world scene, we followed the US elections throughout the year with interest. I must admit there was some relief when Donald Trump won, although I still say that he is not a conservative. Still, it would be very difficult for him to be worse than Obama, or Hillary. I expect that he will be better than either of those two, but he has a maximum of two terms to serve, and if recent history continues the trend, they will elect a “Democrat” next time, and I shudder to think what he/she (or ze) will be like!

God has granted America a moment of grace; now is the time to turn to Christ, before it is too late!

Is Donald Trump the Antichrist?

I do not think that Donald Trump is the Antichrist, but as I wrote in one of my articles, Donald Trump fits the pattern of the Antichrist. In order for the world to accept the Antichrist, Satan will put someone very obviously evil in a place of power first (like Obama), then when they don’t think they can stand any more, a “white knight” will arise and sweep them off their feet!

Could God use Donald Trump in a way that sets-back the Gog/Magog coalition, and delays their attack on Israel? While I don’t yet understand how He will do it, I think this is likely. But let’s wait-and-see if he even makes it to the White House.  There are a lot of people working against Donald Trump, and given the character of his enemies, I think it would be better to support this new president!

As I predicted in The Spirit of Prophecy, in 2010, I expect the European Union to eventually break-up; not into the original founding nations, but into smaller regional and economic unions. Everyone knows that small little independent nations are vulnerable to bullying from their larger neighbours, so it is in all their interests to join together into some form of mutual defense unions. I believe the immigration and financial crises Europe is experiencing right now will provide the motivation for Europeans to rethink their Union.

I also think the resulting unions will reflect the biblical patriarchs those people are descended from; So Eastern Europe, like the Poles, Czechs, Slovaks, Hungarians, Finns, Georgians, Ukrainians, etc. Will form a union loosely based on the Warsaw Pact, but not aligned with either the Russians or the western Europeans. These people are threatened on both sides, and it makes sense for them to band together for mutual protection.

The world saw how western Europe stood idly by and allowed Russia to take the Crimea from the Ukraine without hardly a peep of protest. In order for eastern Europe to prevent their members from being carved-up piecemeal, they need to band together and form their own union. One that will actually stand-up to external threats.

In the process of doing this, the descendants of Magog will form one of the most infamous nations for a future invasion of Israel, found in Ezekiel 38 and 39. One of the amazing things that Scripture teaches about this nation is that it will survive the Great Tribulation, and the Millennial Reign of Christ, only to lead another rebellion some thousand years later. (See Revelation 20:8)

Watch the Visegrad group of nations. I expect they will gain members and grow in influence, ultimately leading to them leaving the EU to form their own union.

Javan is absent from Ezekiel’s account. The Italians, Greeks, and other southern Europeans are descendants of Noah’s grandson Javan. These nations are going through their own troubles today, including the immigrant crisis, and also their own economic crises, brought about by left-leaning governments with out-of-control spending, and stagnant economies.

Spain is one country which is split between descendants of Javan, the Spanish, and the Celts of Catalonia, descendants of Gomer. Now, since Ezekiel says that “all of Gomer’s bands” will participate in that war, either Spain will go with northern Europe, or Catalonia will separate from Spain.  I think the Catalonian independence movement will gain ground, because Spain is more like Italy, and Greece, than France and England.

Just because Britain has voted for Brexit, it does not mean that Brexit will happen… until it actually happens!

Most prophecy teachers correctly teach that Gomer is Turkey, but they neglect to mention that it is Gomer’s son Togarmah who is the father of the Turkic tribes. This includes not only Turkey but also Azerbaijan, Uzbekistan, and Turkmenistan. In fact, the Uighurs are a Turkic tribe within the borders of China! Unfortunately these prophecy teachers frequently neglect to mention Gomer’s other two sons, Ashkenaz and Riphath.

Riphath was the father of the Celtic tribes, who are represented by not only the Scotts, Welsh, and Irish, but also the Bretons of France, and the Catalans of Spain.

So Gomer is not only Turkey, but a large part of northern Europe from Ireland in the west to the nations of the former Soviet Union in the East! This does not include Russia, however, since Russia is represented in the coalition by their patriarchs Rosh, Meshech, and Tubal.

As we watch the break-up of the EU, however long it takes, we should expect to see these nations join together in one or more regional unions, and, these unions will be along ancient tribal lines!

Will this all occur in 2017? I don’t think so, but things are definitely moving in that direction, one step at a time!

I am getting ahead of the schedule, talking about the Ezekiel 38-39 war. This war will occur after the Psalm 83 war, and the fact that none of the participants of the Psalm 83 war are listed as belligerents in the Gog/Magog war is very significant. The ten Arab nations listed in the Psalm will not participate in the next war because they will have lost to Israel and have been the beneficiaries of a peace treaty, which will have been brokered by the Southern Europeans.

This is why their protest of the attack is characterized by their question to the belligerents; “Art thou come to take a spoil?”(Ezekiel 38:13) You see, some prophecy teachers say that Europe is Tarshish in this verse, but this cannot be because while Tarsus is in Turkey, this would be like one city in Turkey protesting what the rest of Turkey is doing.  With a dictator like Erdogan in control of Turkey this will not happen!

The fact that the protesters use the phrase “art thou come” indicates that the armies will be marching through their territory on their way to Israel. Sheba, Dedan, and Tarshish are all Arab entities, and the best explanation for the term “Tarshish” is that this is actually the Syrian port of Tartus, which will become the new capital of Syria after the Psalm 83 war when Damascus becomes a heap of ruins (Isaiah 17:1).  These nations will sit helplessly by as the Gog/Magog armies march through their territory to get to Israel!

While there were at least three ancient cities with similar sounding names around the Mediterranean, what we should be looking for is a city that will benefit from peace with Israel, after losing a major war with her. Given the prophecies concerning these end times wars, Tartus, Syria is the best candidate for this mention. Once the Syrians are no longer involved in a civil war, and no longer fighting with Israel, they will benefit financially, and their port will become a great source of revenue to the nation.

So, much more imminent than the Gog/Magog war is in fact the Psalm 83 war. Could this war occur in 2017? Again, I think it is unlikely. I can’t see the various factions of the Syrian civil war suddenly joining hands and attacking Israel with the rest of the Arab nations. In fact the war in Syria is also being fought in Iraq. Both of these conflicts will have to be ended some time before the Arabs join together to attack Israel.

The Psalm speaks of this attack being “crafty” so I take it that Israel will have their guard down at the time.  Could it be because these nations will have used Israel’s intelligence to defeat ISIS, and to neutralize the Iranian nuclear threat?  Is it possible that there will Arab/Israeli cooperation to take-out Iran’s nuclear installations, which both the Arabs and Israel view as a threat?

I think this is likely, but it would be a mistake for Israel to let down their guard just because the Arabs might work with them to defeat a greater enemy, Iran!  After Iran is dealt with, they will turn on Israel!

Could 2017 be the year of the Psalm 83 war?  I don’t think so, but I think events will lead in that direction.  It is more likely that Iran’s nuclear program will suffer a major set-back!

So, could I make any predictions for the coming year?  Only that you need to sit down and hold-on!  We are in for a wild ride!

1 Response to Another new year!