The Rise of the Euroskeptics

When I was a kid, I remember Christians talking about the European Union as if it was the fulfillment of prophecy. Specifically, they claimed it was fulfillment of the ten nations of Revelation 17.

Well, it had just slightly less than ten nations at the time, but then more nations were added, and then still more until now there are twenty-eight member nations.

Then the scholars claimed that “it must mean ten prominent nations”.

I was a kid at the time, so what did I know? So, I just assumed that the scholars must be right.

Later on I found that Jesus had said “man does not live by bread alone, but by EVERY word that proceedeth from the mouth of God”, and I realized that these scholars were looking at the “big picture” but failing to take into account every word of the passage in question. They were, and are, failing to pay attention to details.

Revelation 17 states that the ten kings would rule “one hour with the beast”. Now, if a day with God is a thousand years, then an hour must be a somewhat shorter period of time. One twenty-fourth of a thousand years is 41.666 years, but I don’t think we need to take it quite that literally.

And the ten horns which thou sawest are ten kings, which have received no kingdom as yet; but receive power as kings one hour with the beast. Revelation 17:12

Notice that the kingdoms in question did not exist at the time Revelation was written (no kingdom as yet). These ten kingdoms are new nation-states, who’s rulers show up at the same time as the nation itself. This would seem to rule out old nations that have been with us for hundreds or thousands of years.

Of course there is very little new geography being created on the earth at this time, rather, these new nations are conglomerates of older nations, super-nations if you will. The European Union could end up being one of these nations, but it is definitely not the whole ten.

No, this is a reference to new entities like the EU,  NAFTA, and the African Union, and another seven, spread around the world.

The ten nations of Revelation 17 encompass all the nations of the world.

So why do some prophecy scholars still point to Europe as being the fulfilment of Revelation 17:12?

I think the answer comes from the fact that Satan always has his counterfeits. If it is in his interest, Satan is quite capable of producing a counterfeit of almost anything, including the ten nations of Revelation, the Antichrist and the false prophet. He has to, if he is going to make the world believe that his Antichrist is a hero, and a Savior!

So, what we are seeing today, in the European elections, is the beginnings of a break-up of the European Union into smaller parts. I am equally sure, however, that one of those components which spin-off from the EU is a ten-nation confederacy. This confederacy will be identified, by false teachers, as being the rebuilt Roman Empire and fulfilment of Revelation 17.

The Italian elections are the exception to the trend.

Could Mateo Renzi be the person Satan has chosen as a patsy, to distract attention from the real Antichrist? I don’t know, at this point, but all Italian politicians are in the running. Another prominent Italian politician to keep your eyes on is Nichi Vendola, whom I mentioned last year. 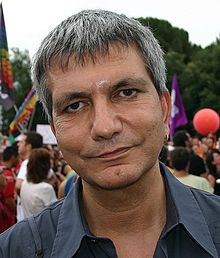 Vendola is the president of Apulia province of Italy, and is an outspoken LGBT activist as well as a Roman Catholic, and communist.  To my mind he would make a better candidate for Antichrist, based on many prophecy scholars interpretations.  As I showed in one of my recent posts, Daniel 11:37 does NOT mean the Antichrist is gay.

We are talking, however, about a deception of the devil, and since so many professing Christians believe the Antichrist will be gay, it would be very surprising if Satan did not provide them with one!

These are interesting times.

1 Response to The Rise of the Euroskeptics