My trip to Germany

My employer has purchased a piece of equipment from a manufacturer in Germany, and saw fit to send a couple of employees to train on it before it is brought to Canada.  I feel privileged to have been selected to go for this training.

For the last ten days I have been in Germany, learning to run, and troubleshoot, this machine.

My introduction to the German culture was interesting, and enlightening.

During the trial of Adolph Eichmann, one of the witnesses broke down, with shouting, and sobbing,  when he saw Mr. Eichmann.  Afterwards someone asked him why this reaction, and he replied to the effect of “I expected to see a monster, and what I saw was a very normal man“.

In my experience in Germany, I found the Germans to be very normal, really just like Canadians!  They put mayonnaise on their fries, just like Americans.  There is nothing particularly evil about these people, so how could they have started two world wars?  The truth is that normal people can do very evil things given extraordinary circumstances.  If you lie to normal people enough, they just might believe your lie!  If they believe it they will act on it, and this appears to be what happened in Germany.

Our universities teach Neitzsche in philosophy class, but did you know that Neitzsche’s ideas lead to Nazism, or at least Fascism?  Neitzsche was Hitler’s favourite philosopher!

The idea that “truth is relative” comes from Neitzsche.  Postmodernism rejects all absolutes, in the same manner.  This is why you find that emergent pastors are starting to support Sodomite “marriage”.  “It’s OK so long as it is monogamous”.  I have heard them say!  What rubbish!

The only absolute that postmoderns follow is “there are no absolutes”!  A self contradictory statement if I ever heard one.  They know this absolutely, of course!

The problem is that postmodernism has infiltrated our media, our churches, and our schools!  If we don’t combat this evil today it will overtake us and we will suffer horrendous consequences, like Germany in the 1940s!

The Germans still close their businesses on Sunday!  My goodness, we might be worse than Germany already!

Well, I have strayed from my original intent.  I wanted to talk about my time in Germany.  For the most part it was positive.  Everyone I met was friendly and helpful.  It was an adventure, and I would recommend to anyone that they take some time to visit other parts of the world.

We spent more time working than sightseeing, but we did get a bit of time to look around Sollingen, Wuppertal, and Duesseldorf, one day.  Here are some pictures I took; 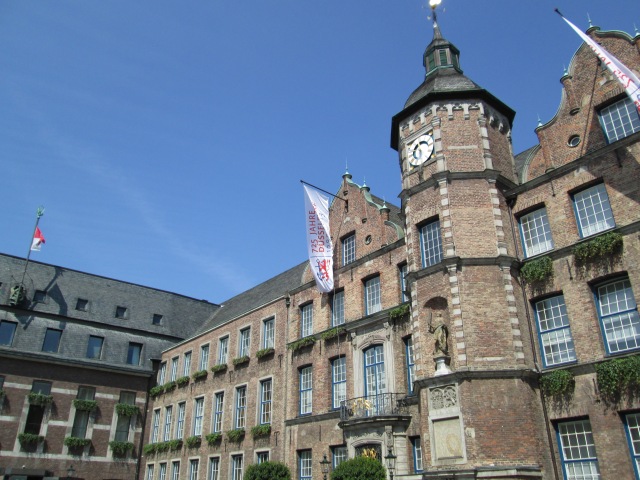 Old building in Duesseldorf with banners proclaiming Duesseldorf’s founding in 1285!

Our Hotel.  Proof that I was actually there, no it’s not photoshopped! The cobblestones make quite a racket when cars drive by, but the BMW smoothed them out. Can’s say the same for the Renault Kangoo! 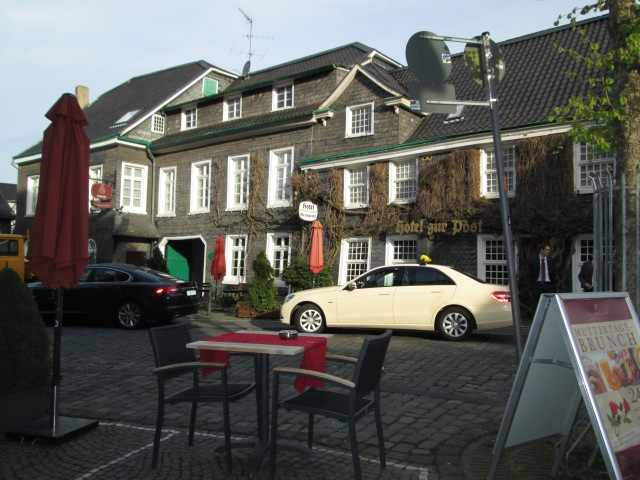 Hotel Zur Post from across the street. The slate-clad building is very old, truly a historical treasure!

Our hotel from up the street, The caption on the old church to the left says it was built in the 1500s!  They still have weddings there.

I found the older architecture rather impressive.

The white vehicle parked on the sidewalk is a Renault Kangoo, like the one we borrowed from our hosts. Caption on the Haus reads “Deutsches Haus im Deutschen Land, Schirm Dich Gott mit Starker Hand”. I have seen this caption somewhere else, but I don’t know what it means. Perhaps someone could enlighten me? Gott is obviously a reference to God but what it says about Him I don’t know.

Restaurant on the Rhine where we had lunch 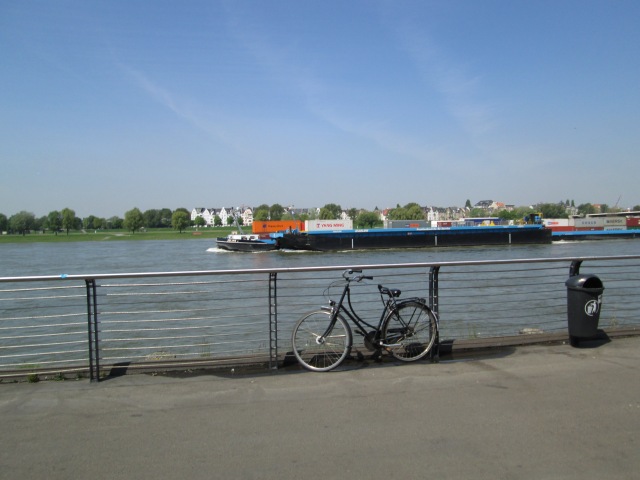 A Barge Struggles up the strong current on the Rhine in Duesseldorf. It took him several minutes to get past us, but the boats going downstream are gone quite quickly.

Downtown Duesseldorf. It appears to be a common practise for European cities to close their downtown streets to vehicular traffic, essentially turning them into a large mall. We found the same thing in Wuppertal and in Sollingen.

An Opel (GM) van. Sometimes it appears that European car manufacturers compete to see who can produce the weirdest vehicles! The truth is that I find the practice rather refreshing. It is better than the usual boring conformity!

A Renault Twizy, a French single-seat car! The windows don’t roll up, so you might not want to drive in the rain!

1 Response to My trip to Germany