“Someone” has attacked an arms plant in Sudan

Sometime over night on Wednesday October 24, 2012, four military jets coming from the east over the red sea, entered Sudanese airspace and attacked the Yarmouk military plant in south Khartoum. 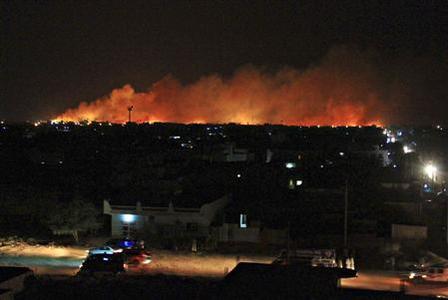 Onlookers gather to look at a huge fire that engulf the Yarmouk ammunition factory in Khartoum October 24, 2012. REUTERS-Stringer

The planes went undetected by radar, and consequently their origin and destination are unknown, but Khartoum has publicly blamed Israel.

The USA has several aircraft carriers in the Middle East, so it could just as easily have been them.

Only two Sudanese were killed in the attack, which shows the amazing care of the attackers.  Had the attack occurred during the day there would have undoubtedly been dozens of casualties.  The Sudanese terrorists don’t deserve such concern for their welfare!

This concern for the welfare of their enemies would naturally point the finger at Israel, for no other nation has ever shown such concern for reducing enemy civilian casualties, as Israel consistently shows.

Why would they blame Israel?  It most likely is the result of a guilty conscience.  The plant is owned by the Iranian Revolutionary guard, and has been linked to arms smuggling by Hamas into Gaza.

Red points on Israel Channel 2 map graphic show Fordo (Iran) to the east, Israel in the center and Khartoum to the south

Was it Israel?  I don’t know, but I hope so.  This is what “deterrence” is.  You show your enemies that you have the capability, and will, to stop them from attacking you.  You show them that you can bring the fight to them.  When you do that most bullies will back off.

If it was Israel, the above map shows that the distance they traveled was farther than they would have to go to attack Iran’s nuclear enrichment facilities in Fordo.

Was Israel making a statement for the benefit of the Iranians?  I don’t know, but I think the Iranian leadership should take note.  Obama is not sincere in his statements about his commitment to protect Israel.  This leaves Israel’s security in the hands of the Israeli government, and God.

Ultimately, the Israeli government will fail, when they make a deal with the Antichrist, and then it will be totally in God’s hands!   Until then they have a job to do, and I applaud whoever it was who took out the Yarmouk facility!

1 Response to “Someone” has attacked an arms plant in Sudan