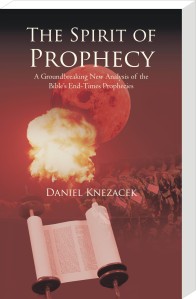 Cover artwork for the Spirit of Prophecy

Over the years, since the late 1980s anyway, I have come across numerous New Age statements that parallel the biblical account of the Tribulation and Antichrist. I had actually already begun the writing of this book before I understood that Satan is preparing his people, and the world, for a “pseudo”, or decoy tribulation period.

Even after my book was published, I keep on getting information that confirms what I am saying. Just in the last couple of weeks I found out about the artwork on display at the Denver Airport, in Colorado. (See HERE)  Have you noticed that this artwork has many parallels with the biblical account, including a Tribulation period, followed by peace on earth? The problem with their account is that their saviour is actually the Antichrist!

What this means is that these people, led by Satan, are planning a “Pseudo-Tribulation” period that will convince many that they are indeed experiencing the biblical Tribulation. The whole purpose in this is so that they will be looking for a saviour and “peace and safety” at just the exact time the Antichrist is set to rise!

If Satan were indeed attempting to convince the world that they were in the Tribulation period, would he not also attempt to replicate the major events of the bible’s account? Wouldn’t he produce a Decoy-Antichrist, and False Prophet? How about a Decoy-Harlot? What about a Decoy-Armageddon?

Isn’t it within Satan’s power to produce a bunch of counterfeits? Couldn’t he counterfeit the counterfeit? Hasn’t he already done this, many times?  Antiochus Epiphanes, Nero, Napoleon, Hitler, and Stalin, are only a few that come to mind.

I think that a European Union leader will become the stand-in for the Antichrist. I think he will broker a peace treaty between Israel and the Arabs, at the end of the Psalm 83 war.  This peace treaty will actually be the same treaty the real Antichrist will “confirm” several years later, after the Gog and Magog war!  This leader will be handsome, charismatic, Italian, and gay, and the world will point to him and say he is the Antichrist! He will likely also produce some sort of bio-chip identity system, and an economic system that works, for a time. I also think the pope will give open support to this man, leading many to identify the pope as the false prophet, which he is, he’s just not THE false prophet.

I believe that a few years later, probably during the Gog and Magog war, these men will be destroyed in a nuclear attack on Rome, or maybe even the celestial bombardment of Ezekiel 38:22. The world will look at this event and breathe a sigh of relief: “The Antichrist and false prophet are dead! Fulfillment of Revelation 17 & 18! Now is the time for peace and safety!” Most likely this event will result in the remnants of the Catholic church joining hands with the rest of the world’s religions, including protestants, and moving their headquarters to a different city, most likely Babylon, on the plains of Shinar. Rome will be uninhabitable by then.

During this same Gog and Magog war, a counterfeit Armageddon, the network of dams on the Euphrates will be used to dry up the river so the Russian, Iranian, and allied armies can cross. Again, many will point to this event and say it is fulfilment of Revelation 16:12! The problem is that, in the context of this passage, the river Euphrates will dry up because of the lack of rain, and the excessive heat, not because some dam worker pushes a button!

Do you see where I am coming from? With the perceived fulfilment of Revelation’s Tribulation passages, the next thing on the agenda is the arrival of Christ, only it will be “the Christ” of the New Age who arrives at this time, the Antichrist!

The actual Antichrist will come from somewhere much closer to Israel, than Rome. Chapter 7 of The Spirit of Prophecy provides much evidence of the true origin of the Beast, and even examines some of the Scriptures the False Prophet will use to validate the Beast’s claim to be the Christ!

One of the things that is leading to the above is the failure of Christians to study the whole bible! In these days of “Christianity-Lite”, most professing Christians are not studying all of the bible, but only selected passages, and those are filtered by our leaders! Even those who study the bible, generally avoid the Old Testament, or stick to familiar passages.

Jesus repeatedly warned us about “every word of God” and every “jot and tittle”, yet Christians are content to live with vague generalizations! If fulfilments are “sort-of like the prophecies”, that is good enough for us! I’m afraid this attitude will get us into trouble. Just as prophecies must be fulfilled 100% to be from God, they must be 100% fulfilled to be truly fulfilled…i.e. to the letter!

My book has fleshed out this theory, and has produced many more biblical references. At times I was uncomfortable with what I had included, but I believe the Lord was leading me to include them anyway! I still am uncomfortable with this book, not because I don’t believe it, but because I am aware that some people will be angry with me. I don’t like being the object of people’s anger! I didn’t write this for people, however, but for the Lord Jesus Christ. It is all for Him, and about Him! Still, I am hoping that people will indeed benefit by reading this book, some perhaps even after the rapture!