The Catalans and the Gog and Magog war

In my studies on the Gog/Magog war, of Ezekiel 38-39, I discovered that this war is much bigger than most imagine. No doubt it will be referred to as World War 3, after the fact. Many will even refer to it as Armageddon, but it is actually not a part of the Tribulation period at all.

With the current Russian cooperation with Iran, many prophecy teachers are teaching that the Gog/Magog war is imminent. This is incorrect.

While it is true that Russia (Meschech and Tubal) and Iran (Persia) will be a part of the Ezekiel 38-39 war, they do not represent the whole attacking army.

The attacking army of the Gog/Magog war will come from the British Isles in the west, all the way to the borders of China in the east, and down to Turkey and Iran in the south. Other nations in the south will include Sudan (part of ancient Ethiopia), Ethiopia, and Libya.

Conspicuous in their absence in the account, are the Arab nations surrounding Israel. This is because the Arab nations like Lebanon, Syria, Iraq, Saudi Arabia, Jordan, Yemen, Kuwait, the U.A.E., Qatar, and Bahrain will have made peace with Israel long before this war begins. They will attack Israel several years earlier, during the Psalm 83 war, and being soundly beaten, they will sue for peace with Israel.

Israel may be instrumental in forming a super-nation of the defeated Arab nations after the Psalm 83 war.

The Arabs will not want the attack, but are listed as nations which protest the invasion; Sheba, Dedan and Tarshish.  These names are traditionally listed as Arab entities, and it will be the same during this war.  Tarshish is likely the Syrian port of Tartous, which will become the capital after the destruction of Damascus.

This is clear, but Ezekiel states that the attacking armies will include “Gomer, and all his bands”, and specifically designates Togarmah. Gomer, however, had three sons, Ashkenaz, Togarmah, and Riphath.

I have discussed before how Ashkenaz was the father of the Germanic tribes, which includes Germany, Austria, Holland, Denmark, Norway, Sweden, and the English. There can be no doubt that the Gog/Magog war will include all of these nations.

Togarmah was the father of the Turkic tribes who are spread from Turkey in the west to the Uyghurs in western China, and include representation in nations like Uzbekistan, Kyrgyzstan, and Azerbaijan.

Riphath was the father of the Celtic tribes which includes Armenia, Ireland, Scotland, the Welsh, the Bretons, or Gauls, and the Catalans of Spain.

I didn’t say much about the Catalans before, chiefly because I had not researched these people. In view of the current Catalan push for independence from Spain, I thought I had better take a closer look at these people. 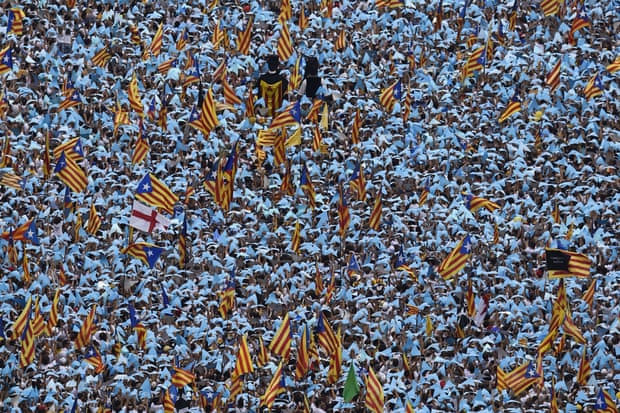 Hundreds of thousands of Catalans fill the streets demanding independence, before a regional election billed as an indirect vote on breaking away from Spain. Photograph: Lluis Gene/AFP/Getty Images

The Ezekiel account lists the tribes by their patriarchs or ancient tribal names, and Gomer’s brother Javan is another who is conspicuous by his absence. Javan was the father of the southern Europeans, including the Greeks, and Italians. I am not sure where Spain fits in, but it is quite clear that the Spanish and the Catalans have different ancestry. The Catalans of Spain, and the Gauls of France, are much closer to each other than they are to the others in their respective nations.

Would God list the Spanish as descendants of Javan, and include them with the Greeks and Italians? I think so.

As the European Union breaks-up who will go in which direction? Will the borders of nations be split with parts going with the north and others going with the south? It is looking that way!

“And the ten horns which thou sawest are ten kings, which have received no kingdom as yet; but receive power as kings one hour with the beast.”

That agreement will be the prototype for the real Antichrist’s treaty, but the first signers will NOT be the Antichrist and False Prophet, just patsies who take the fall for the real thing!  Once a treaty is signed, the armies of Gog and Magog will have to destroy Rome simultaneously if they hope to defeat Israel!

It thus follows that Satan is planning to destroy these decoys, in Rome, during the war of Gog and Magog, as a way of diverting attention away from the real False Prophet and Antichrist. After all, who would look for the Antichrist, if he is already dead?

So, where will the Catalans be during the Gog/Magog war? They will be allied with the Gog/Magog armies, attacking the Southern European Union, on their way to Israel!

5 Responses to The Catalans and the Gog and Magog war