So, how should we view the current, sudden, rise of the al Qaeda offshoot ISIS, in the Middle East?

It’s simple really; the rise of ISIS fits exactly with the End Times scenario as I have outlined above. It even answers the spacing of the two wars mentioned, and why the nations of the second are not a part of the first. The enmity between the Shiite and Sunni Muslim sects is so great that they cannot cooperate on anything, even when it comes to Israel, and that enmity is getting more intense by the day. 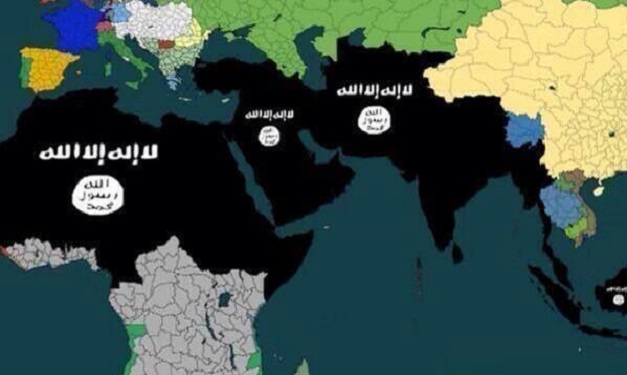 ISIS’ recent release of their 5 year expansion plan would certainly not give the Iranians any reason to trust, or cooperate with them on anything. Notice that their goals include taking over all Muslim territories, even those controlled by the Shiites today including Syria, Lebanon, and Iran.

Not only is ISIS poised to take over all of Iraq, and large parts of Syria, they are already making moves in the direction of Jordan and Saudi Arabia.

Even inside Jordan there are large numbers of ISIS, and al Qaeda, supporters agitating for a change of government. Since ISIS is made up of Sunni Muslims, you will find that they already have a large base of support inside Saudi Arabia as well. In fact it appears that the Saudi government was one of their early backers, an action they are soon to regret.

The Jordanian airforce has already seen action against one ISIS incursion into their territory, and it won’t be the last.  I would not be surprised to see an internal revolt by ISIS aligned groups in both Jordan, and Saudi Arabia, nor would I be surprised to see the same thing in Egypt, or an alliance between ISIS and the Sunni Muslim Brotherhood.

So who are the nations mentioned in the Psalm? Once we know who is being referred to, then we can see if it is indeed being fulfilled;

4 They have said, Come, and let us cut them off from being a nation; that the name of Israel may be no more in remembrance. 5 For they have consulted together with one consent: they are confederate against thee: 6 The tabernacles of Edom, and the Ishmaelites; of Moab, and the Hagarenes; 7 Gebal, and Ammon, and Amalek; the Philistines with the inhabitants of Tyre; 8 Assur also is joined with them: they have holpen the children of Lot. Selah. Psalm 83:4-8

Here is the list, and who they are today;

Edom; – One of the three founding peoples of Jordan, and the predominant tribe.

Ishmaelites; The Saudi Arabians, which may also include nations like Yemen, Qatar, the U.A.E., Bahrain, and perhaps Kuwait

Moab; another third of Jordan

Hagarenes; these have been mistakenly identified as Egypt, because Hagar came from Egypt. The bible identifies them as two tribes of Ishmaelites, who left their brethren in Saudi Arabia, and lived in Gilead, the area known today as the Golan. You can read about them in 1 Chronicles 5. While they lost that particular war to Israel, you can bet that they are still there, having moved back after the Israeli expulsion by the Assyrians. They were some of the early rebels against Assad, because he made threats to Israel, but didn’t follow up on them. It is this group that will drag Syria, or at least a part of Syria, into this war

Gebal; a city of Lebanon,

Ammon; the last third of Jordan. These people, along with Edom and Moab not only comprise the majority in Jordan, but are also the majority of the Arabs living in Judea and Samaria, the area commonly known as the “West Bank” today.

Amalek; the inhabitants of the Sinai peninsula, and full of Muslim Brotherhood, and al Qaeda supporters. These people smuggle arms into Gaza today, through the terror tunnels. These people will drag Egypt into this war.

Philistines; The inhabitants of the Gaza strip, known as Palestinians today, and the true heirs of the name.

Tyre; another city of Lebanon

Assur; Assur was the patriarch of the tribes of the northern part of Iraq. These people made news recently when Mosul was taken by ISIS. Mosul is the capital of Nineveh province. Nineveh, who’s ruins are in Mosul, was the ancient capital of the Assyrian empire.

While ISIS’ map covers a larger area than these tribal territories, they will not be successful in uniting that many Muslims. Libya, Turkey, Ethiopia (Sudan) and Iran are not a part of the Psalm 83 war, and in fact neither are India, and Malaysia.

My conclusion is that the Psalm 83 war will occur before ISIS realizes the completion of their goals, and will take place in the middle of their conquests. Its result will cause ISIS to pretty much disappear as a political force. Israel will be left the dominant nation in the Middle East. From the map you can see that they intend to take Israel’s territory as a part of this plan. They are serious in this, and in all of their threats, but they are no match for the God of the bible.

ISIS is even threatening nuclear war against Israel I believe the evidence is that the Psalm 83 war will end in nuclear destruction of several cities, including Damascus, Cairo, Baghdad, Riyadh, and possibly other Middle Eastern cities. (Isaiah 17:1, Ezekiel 30:1-9, Zechariah 11:1-2) The seriousness of ISIS’ threats will not leave Israel any choice…they will act on them.

As I have stated numerous times, I still believe that the Antichrist, the Beast, will come from the royal family of Jordan, but this does not mean that Abdullah must remain on the throne throughout these events.

In fact, I would highly doubt that Abdullah and his family will still be in power during the Psalm 83 war. I rather suspect that they will flee, and might even take refuge in Israel.  There is no way that an Arab leader who publicly encouraged a major attack on Israel, like the Psalm 83 attack, would ever be trusted by the people of Israel, and Satan knows this.

If the false prophet is Jewish in background, (and he is) then the best place for him to meet the Antichrist would be in Israel. Who would ever suspect that a young refugee, fleeing from Muslim oppression, could turn out to be the most dangerous person the world has ever known?

Is it possible that a refugee from ISIS’ murderous campaign could actually be more dangerous than ISIS in the long run? I think so.  It is not only possible, it is likely!

11 Responses to ISIS in biblical prophecy